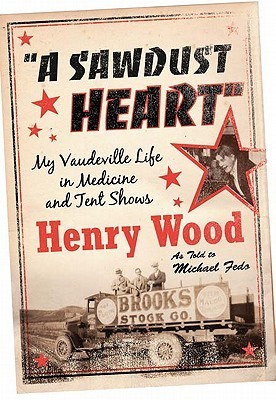 A Sawdust Heart: My Vaudeville Life in Medicine and Tent Shows

by Henry Wood, as told to Michael Fedo

"This little paperback holds the reminiscences of Henry Wood, who left his hometown of Viroqua, Wis. To spend 1910-1941 traveling with medicine and tent shows. The likable Wood is brought to readers thanks to Fedo, his grandson-in-law. . . . Wood recalls how he transformed from a farm kid to a well-dressed man who wasn’t even recognized by his mother and father when he went home for a visit. One of his funniest memories is of how actors who played villains had to stay at hotels outside the city where they were performing because audiences didn't distinguish between the men and the part he was playing, and actors were beat up for pretending to be bad guys. . . . How fortunate that Fedo took the time to write down (Wood’s) memories of an almost-forgotten period in the history of entertainment."--St. Paul Pioneer Press

"This is a true accounting of a young Wisconsin boy who ran away to join show biz at age 12. This happened over 100 years ago, and his recollections are quaint, sweet, and just right for historians and anybody who wants a peek at life so long ago." --Savannah Morning News

"A Sawdust Heart is a gift from Michael Fedo, who has a talent for recognizing the need to document significant moments in history. (He also wrote The Lynchings in Duluth) . . . this respectful and smoothly-rendered transcription is storytelling at its best." --Duluth News Tribune

"Henry Wood’s as-told-to memoir recalls three anecdote-rich decades in the life of a performer and director in old-time medicine shows and vaudeville, beginning in 1910 when the young Wisconsinite was 12 years old. Wood’s story, skillfully told by his grandson-in-law Michael Fedo, offers a glimpse into an earlier entertainment era when isolated rural Americans welcomed the diversion of a traveling theater troupe." --Minnesota History Magazine


It's a special thing to say of a book after reading, "That was much too short." . . . Priceless is too trivial a word to use in this case. Performing Arts Archive