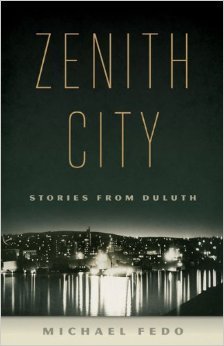 Duluth may be the city of "untold delights" as lampooned in a Kentucky congressman’s speech in 1871. Or it may be portrayed by a joke in Woody Allen’s film Manhattan. Or then again, it may be the "Zenith City of the unsalted seas" celebrated by Dr. Thomas Preston Foster, founder of the city’s first newspaper. But whatever else it may be, this city of granite hills, foghorns, and gritty history, the last stop on the shipping lanes of the Great Lakes, is undeniably a city with character -- and characters. Duluth native Michael Fedo captures these characters through the happy-go-melancholy lens nurtured by the people and landscape of his youth. In Zenith City Fedo brings it back home. Framed by his reflections on Duluth’s colorful -- and occasionally very dark -- history and its famous visitors, such as Sinclair Lewis, Joe DiMaggio, and Bob Dylan, his memories make the city as real as the boy next door but with a better story.

Here, among the graceful, poignant, and often hilarious remembered moments -- pranks played on a severe teacher, the family’s unlikely mob connections, a rare childhood affliction -- are the coordinates of Duluth’s larger landscape: the diners and supper clubs, the baseball teams, radio days, and the smelt-fishing rites of spring. Woven through these tales of Duluth are Fedo’s curious, instructive, and ultimately deeply moving stories about becoming a writer, from the guidance of an English teacher to the fourteen-year-old reporter’s interview with Louis Armstrong to his absorption in the events that would culminate in his provocative and influential book The Lynchings in Duluth.

These are the sorts of essays -- personal, cultural, and historical, at once regional and far-reaching -- that together create a picture of people in a place as rich in history and anecdote as Duluth and of the forces that forever bind them together.